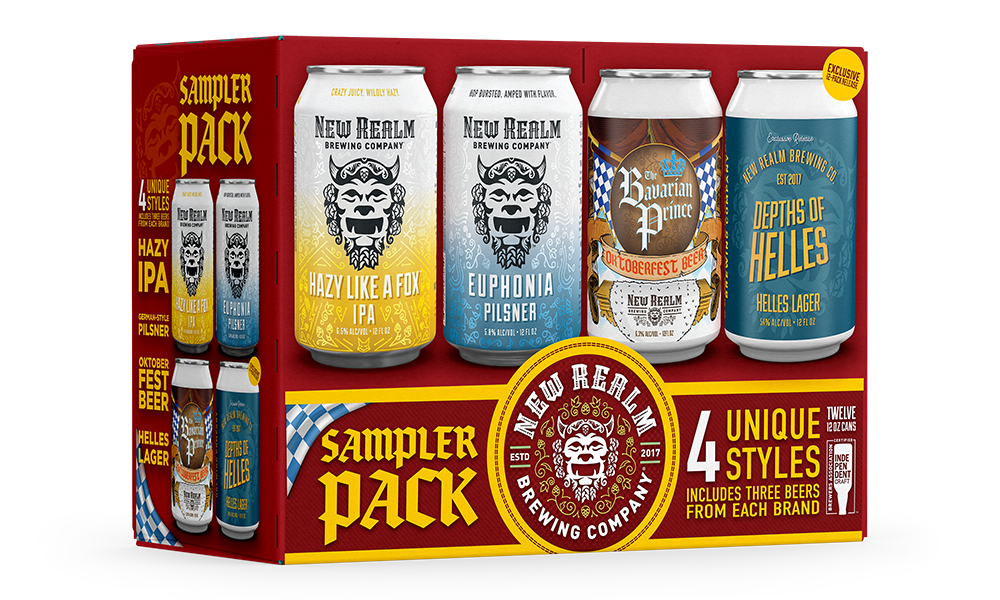 ATLANTA, GA – July 27, 2021 Oktoberfest season is just around the corner, and New Realm Brewing has you covered with their all-new German-inspired Sampler Pack. Complementing New Realm’s best-selling Hazy Like a Fox IPA are three traditional German-style lagers, including the award-winning Euphonia Pilsner, returning fan-favorite Bavarian Prince Oktoberfest Beer, and Depths of Helles Lager which is exclusively available in this fall sampler pack.

In this Fall Sampler, you’ll find two of New Realm’s award-winning mainstay brews, Hazy Like a Fox IPA and Euphonia Pilsner. Hazy Like a Fox is a New England-style Hazy IPA known for its juiciness, pillowy soft mouthfeel, and notes of pineapple, orange, and tangerine. Euphonia is a golden, German-style Pilsner that combines a traditional recipe with modern hopping techniques to give this work of art a vibrant hop aroma and soft bitterness. Euphonia is one of New Realm’s most decorated beers, winning the Virginia Craft Beer Cup’s Best in Show among other accolades.

Alongside these two flagship brands is fan-favorite Bavarian Prince, back for another year. This seasonal specialty is a Märzen-style Oktoberfest Lager known for its deep amber pour, European malty flavors and aromas, and a balanced floral hop character. Rounding out the pack is Depths of Helles, a malty, classic German lager that is new to New Realm’s portfolio and exclusive to this sampler pack. Known as one of the four “everyday beers” of current German beer culture, the Helles Lager is a staple. New Realm’s has a malt-forward medium body and finishes crisply.

“This sampler pack is one we have been very excited for,” shared Mitch Steele, Co-Founder, and Brewmaster of New Realm Brewing. “There is a strong German Influence in the beers we chose for this release and a lot of new and old brewing techniques that went into the creation of each beer. Depths of Helles Lager, our sampler pack exclusive beer, was developed by our Lead Brewer Steve Taylor and will surely become a fan-favorite, with its rich malty flavors and crisp finish.”

This latest New Realm Sampler Pack will be available beginning July 20th in the company’s brewery to-go coolers, with distribution to retailers beginning in early August around Georgia, Virginia, and South Carolina. Additionally, Bavarian Prince will be returning in its own 12oz 6 packs for the third straight year.

Distribution: Throughout Georgia, Virginia, and parts of South Carolina

New Realm products are available at its locations as well as at bars and retail outlets throughout Georgia, Virginia, and downstate South Carolina. For a complete list of locations, hours, information on private events and public tours, as well as additional information, visit www.newrealmbrewing.com.