Beers from my past (part 1): The Anheuser-Busch American Originals

I’ve been getting pinged a lot lately in Social Media about the recent re-introduction of Anheuser-Busch’s Faust Lager. This spurred me to go into our garage over the Thanksgiving weekend and pull out a bunch of the stuff I saved from my time in New Products at Anheuser-Busch.  It was a great trip down memory lane, I actually saved quite a bit from that time, including full bottles of just about every beer I worked on in my 3 years in Corporate Brewing and a lot of the marketing materials we developed.

I decided it might be fun to write about these beers and some other beers that I’ve been involved with brewing over the years. This is the first in the series, there will be several more. I’ll try to relay what I remember as the story for each one of these beers-as every beer has it’s own unique history.

In 1995, after 3 years of working as a brewing supervisor in AB’s Ft Collins Brewery, I was asked if I’d be interested in moving to St. Louis and working in Corporate Brewing in Mike Meyer’s Brewing Process Technology Group, which was primarily a brewing engineering projects group, but also had the fledging new products group as well. The brewing managers involved in new products were considered part of Anheuser-Busch’s Specialty Brewing Group-which wasn’t really a separate entity, but included our group and folks from marketing working together to create  the brewing process and marketing campaigns for these new beers.

When I interviewed for the job, AB had just recently released their first forays into Specialty Beers (we did not call them “craft” or “micro brewed”):  Elk Mountain Ale, Elk Mountain Red Lager and Crossroads (a German Hefeweizen) were most certainly inspired by the growing craft brewing movement, while Michelob Amber Bock and Red Wolf were more American Lager style “crossover” beers. More on these beers later.

While I interviewed, I learned about the latest project, The American Originals project-a marketing effort to reintroduce some long forgotten brands from AB’s pre-prohibition portfolio. I loved the hoppy Elk Mountain Ale, and the opportunity to dive into the history of AB and recreate some very interesting beers seemed like a really cool opportunity. So I was thrilled when I was offered the job, and we left Colorado to move to St. Louis.

Here’s a list of lager beer styles brewed by AB in its history. Not all these beers fit into traditional beer style categories, obviously.

When I got to St. Louis, Dan Kahn and Paul Mancuso had already developed test brews and had mostly completed the recipes for the first three American Originals beers: Faust Lager, Muenchener, and Black & Tan Porter. Dan had just been promoted to be the Executive Assistant to Gerhard Kraemer, then VP of Brewing, and I was taking his place on the team. My job was to work with Dan and Paul to finish the recipes and get them out to the Merrimack and Fairfield breweries for brewing.

The story told about the American Originals beers was that AB found old recipes from Adolphus Busch in their archives, and used his handwritten recipes to recreate some of the more flavorful beers that existed before prohibition. But what we brewers actually saw during the development of these beers was just a small notebook of Adolphus Busch’s in which he scribbled down malt and hops for some of these early beers. The notes were very vague, giving pounds of German hops, or American hops, and weights of malts which had very little descriptors. They weren’t recipes by any means, and so the decision was made to brew beers “in the style” of the originals, based on what little recipe information and marketing and tasting comments we had access to.

AB had a Corporate Archives room underneath the big tour center in the St. Louis Brewery. And we also had a Corporate Historian, Bill Vollmar, who was heavily involved in developing the campaigns for these beers, and later supported them with travel to the various tastings held in Seattle and Denver. Bill was an interesting guy, he knew his history, and enjoyed traveling around and showing people some of the things he had in the archives, like the old pocketknife that Adolphus Busch used to give out to customers that had a little picture of himself on the inside that could be seen by looking through a small sight glass in the body of the knife.

An 1893 letter written by Adolphus Busch copied from the archives. He was complaining about a counterfeit Budweiser being brewed in the west.

The cover of the American Originals Sell In pamphlet. Most of the beers never made the cut, though there was a lot of interest in White Label Exquisite and Old Burgundy Lager

There were a lot of beers that were considered for the American Originals lineup, but eventually only 4 brews were made before the series was canned.

There were a lot of beers that were considered for the American Originals lineup, but eventually only 4 brews were made before the series was canned in favor of the Michelob Specialty Beers Series: Faust, Muenchener, Black &Tan and later, American Hop Ale, which was brewed instead of Old Burgundy Lager or White Label Exquisite because I suggested we brew a really hoppy ale using only American hops that were available in the 1890’s (Cluster and Fuggle). I will write about each of those beers individually in my next post.

Why did the series fail? Lots of reasons, but for one I think the lineup was largely uninteresting to craft beer drinkers. It didn’t help that the first two cities we rolled these beers out to were Denver and Seattle, cities that were already well entrenched in craft brewed ales. Lager beers like Faust or Muenchener had little hope of making a dent in those markets. I question why we didn’t focus these beers in the midwest, they weren’t even available in St. Louis for quite a while after the first release, which made absolutely zero sense to me.

Another reason is simply the dynamics of AB’s marketing department. The marketing team that introduced the American Originals eventually got promoted to bigger and better things, and then new managers were brought in. New managers that wanted to “hit their own home run” as we used to say. They weren’t interested in perpetuating someone else’s project, so they came up with their own ideas. If you look at AB’s specialty beer/new beer releases over the recent years, you will see drastic shifts in direction about every 2 years. A lot of that has to do with the revolving door of the marketing team.

And really, what craft beer aficionado wanted to drink specialty beers from Anheuser-Busch? Very few craft beer fans would even give them a shot. This was a real learning experience for AB, and prompted the investments in Widmer and Redhook later in the 1990’s.

And finally, in the AB culture at that time, everything revolved around Budweiser. We couldn’t talk about these beers on their own, all conversations had to relate back to the Budweiser quality message and the rich traditional German brewing heritage that AB had. While it was a good, strong message, I believe it also derailed any efforts made for these beers to have any substantial impact. Wholesalers had more incentives to place Budweiser, and later, in one of the most disheartening conversations I ever had with marketing, I was told that AB did not want to grow the specialty category. 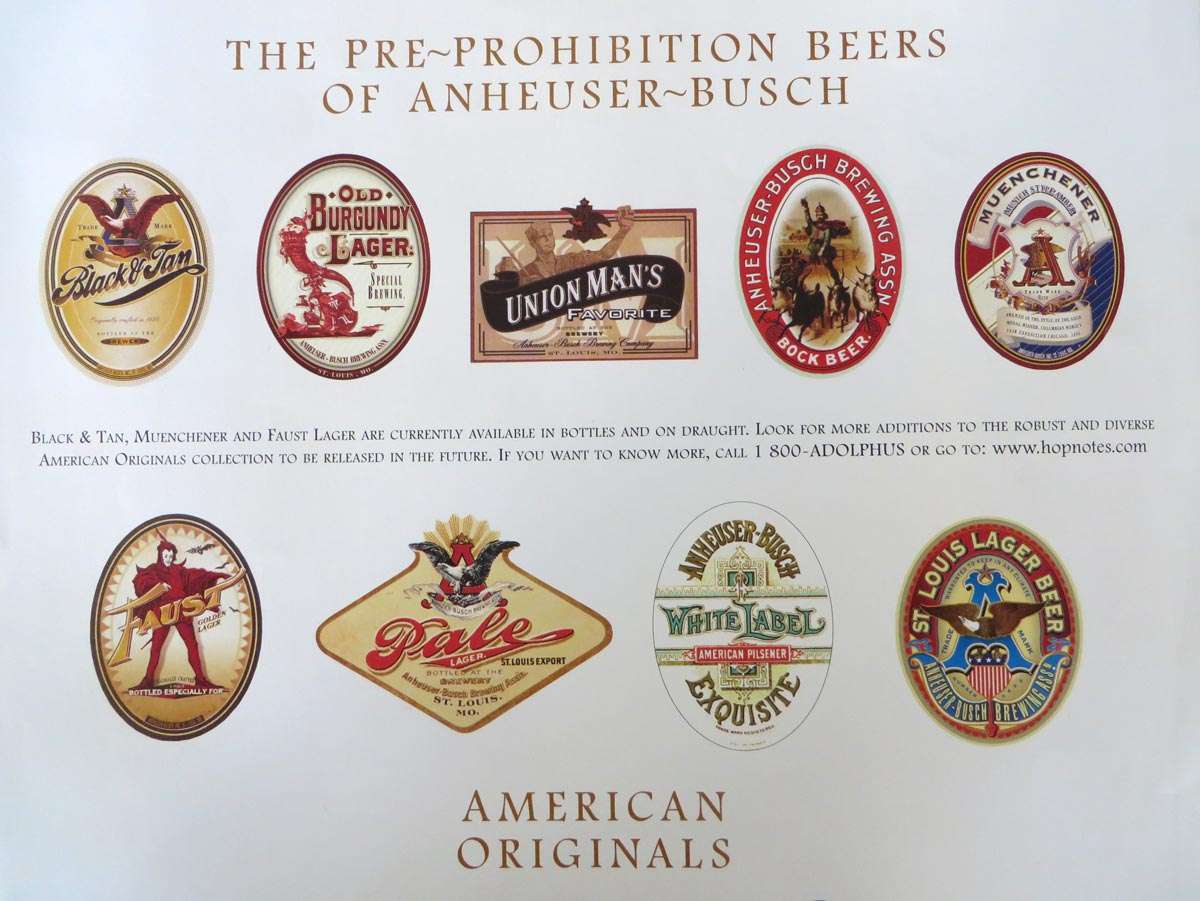 The cover of the American Originals Sell In pamphlet. 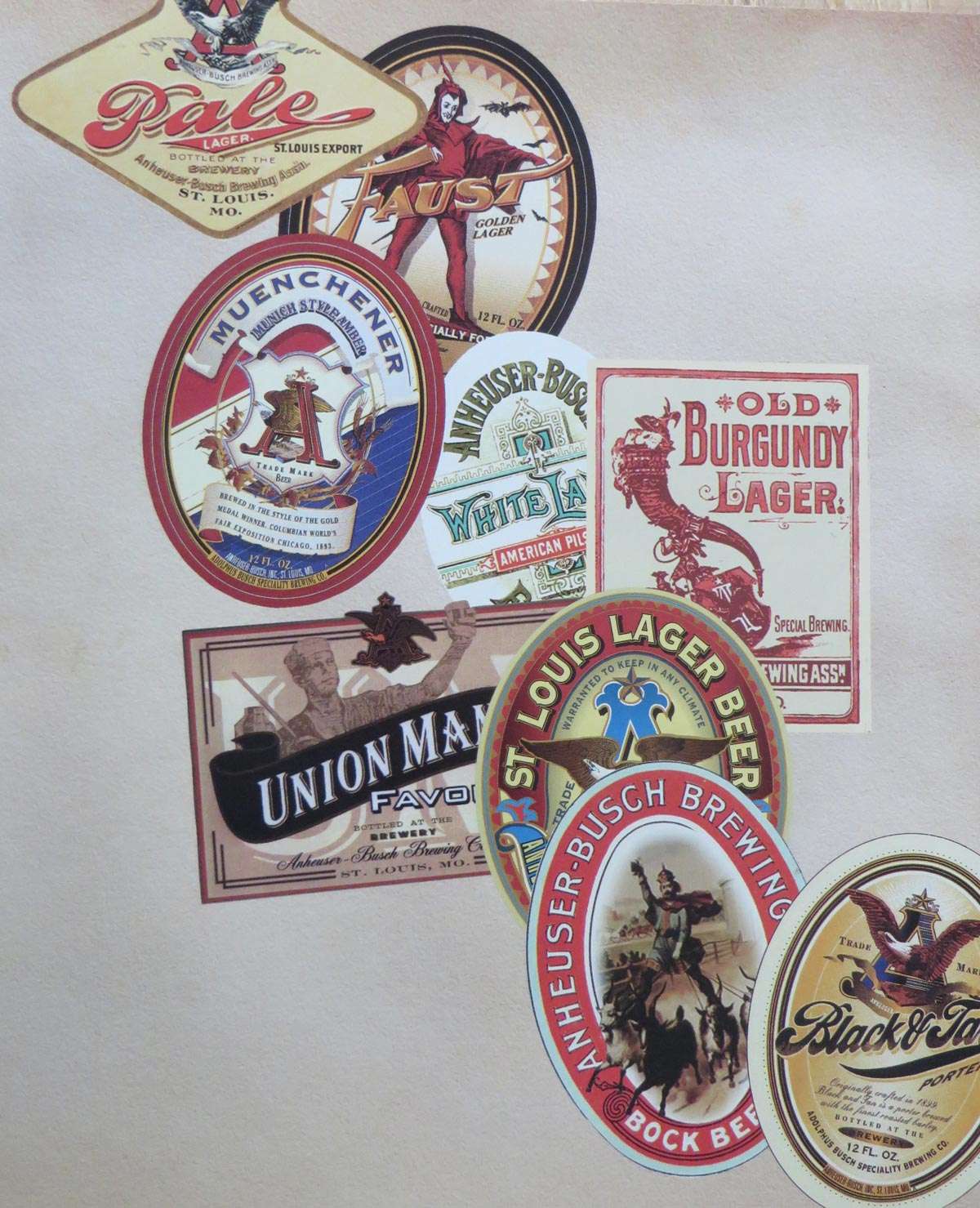 An 1893 letter written by Adolphus Busch 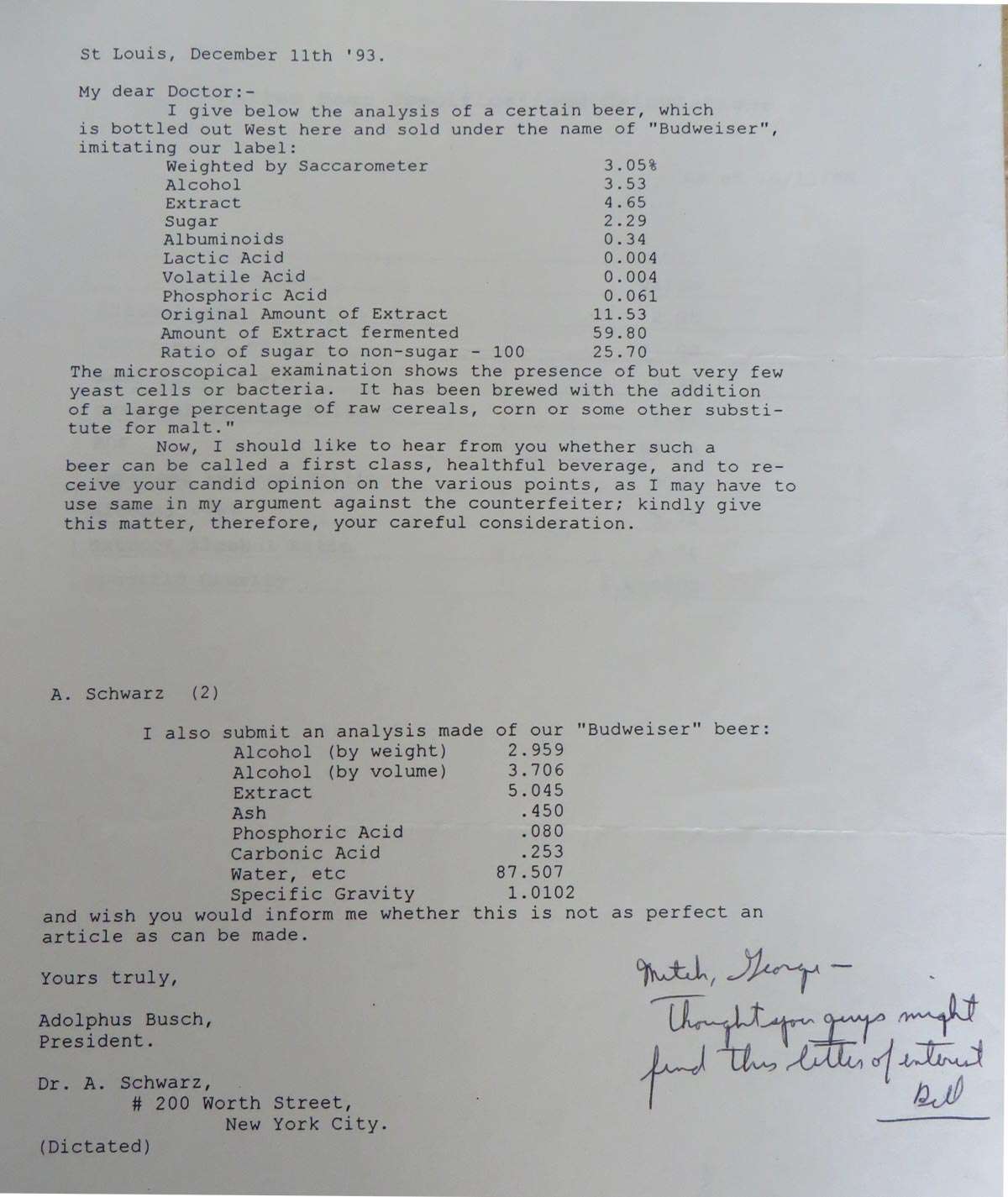 The original proposed lineup for the American Originals 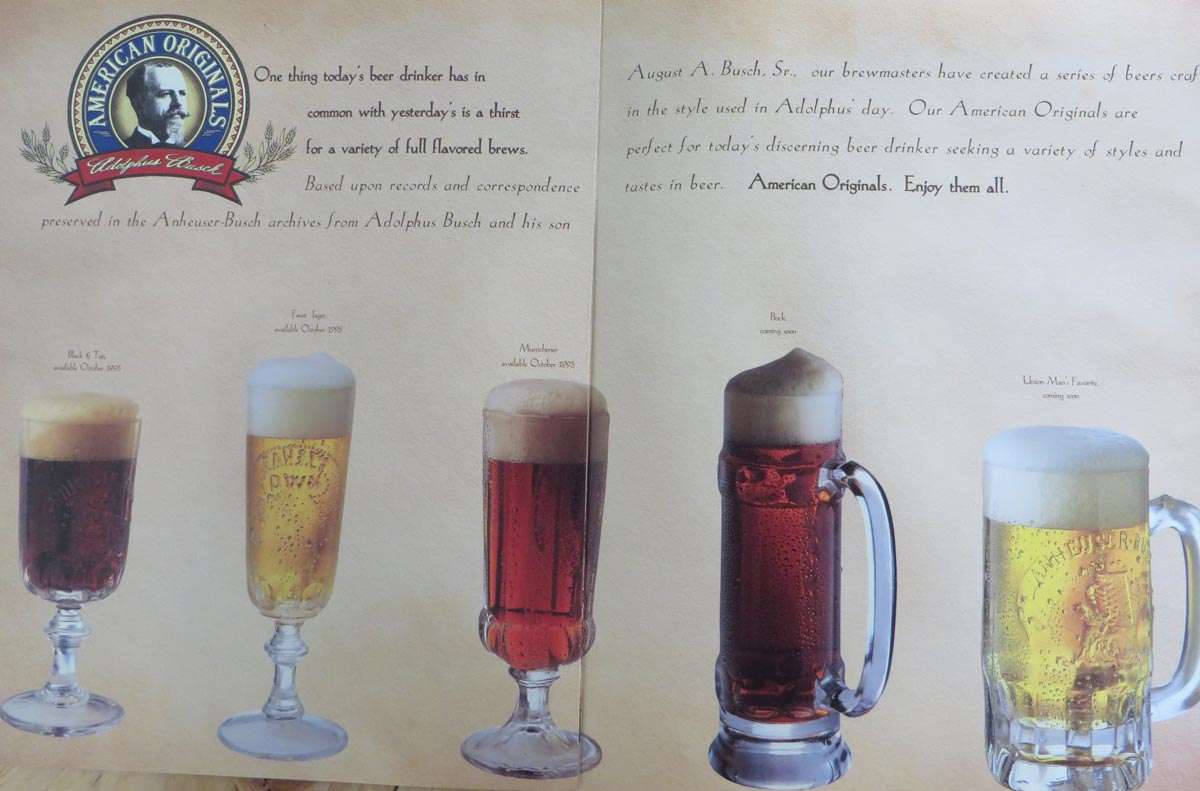