I wanted to explain why our collaboration with the band Blackberry Smoke is such a big deal for me. Warning, it’s a long story…

Most of the people who know me understand that I am as passionate about rock music as I am about craft beer. My love of music started at a young age in the mid 1960s, when my mother would call me in to watch The Beatles on TV, and introduced me to The Ventures and other music that I still listen to. My father was a big Elvis fan. They were always spinning records at their parties (they had a lot of parties) and I got very familiar with the music they played. As I was growing up, I started getting Beatles and Creedence records as gifts and my friends and I would spend time just sitting and listening to the records on a cheap record player. As I got into my teens I started listening to hard rock-bands like Aerosmith, Ted Nugent, Cheap Trick, Blue Oyster Cult, Lynyrd Skynyrd, and AC/DC, and then later in high school some Punk/New Wave stuff like Elvis Costello, Talking Heads, Joe Jackson, The Cars and The Ramones. I’ve always gravitated towards guitar oriented music, and a good melody and strong singing is an added bonus 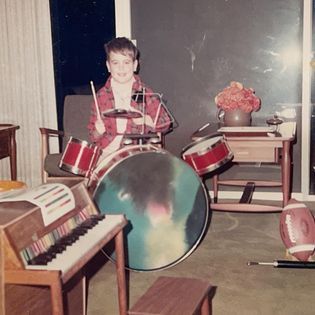 When I went to college, one of my best friends and roommate introduced me to The Allman Brothers, Neil Young, Humble Pie and Cream, and I started doing a deep dive into 1960s rock, bands like The Doors, Crosby Stills Nash & Young, Jefferson Airplane, Grateful Dead and Steppenwolf. After college I became a big blues fan and started listening to Albert Collins, BB King, Buddy Guy, Little Charlie and the Nightcats, Tinsley Ellis, and so many others. And also a lot of jambands, starting with The Grateful Dead and also bands like Phish and Widespread Panic. I went to a LOT of Dead shows in the 2nd half of the 80s. Tom Petty, The Smithereens and REM were on most of my playlists. Since my teens I’ve been an avid music collector and listener, and I love going to live shows. Music is simply one of the major joys in my life

Shortly after I graduated college, I bought another good friend’s Les Paul copy guitar and started teaching myself how to play. I had taken several years of piano lessons as a kid, and so I knew some basics about music theory. But playing guitar opened up a whole new world of music for me as I discovered many amazing guitar players and blues players I had never been exposed to before. Stevie Ray Vaughn, Creedence, The Beatles, Jerry Garcia, The Who, Eric Clapton and The Ventures became my musical influences as I tried to learn how to play. Since then, I’ve played in several garage bands doing mostly classic rock, and these days I tend to pick up an acoustic guitar more often than electric. I love playing, have no aspirations (or the talent) to be anything more than a hobby player, but I love learning new songs and new techniques on the guitar.

I think there has been a real synergy with craft beer and music. I’m not alone among brewers in our passion for great music.

Lots of breweries have gone so far as to market themselves with very deliberate ties to music: Ska Brewing, Fretboard in Ohio and Ocelot in VA to name a few, and the number of beers named after musical references, and the number of bands that have gotten involved with craft beer are countless. 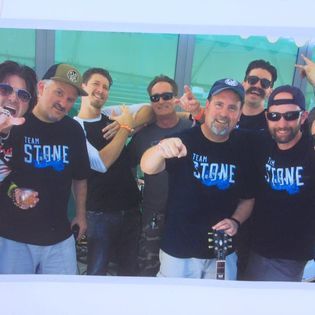 In addition, a lot of craft brewers also play instruments and perform as musicians. My Facebook feed is filled with brewer friends who post about playing music. At Stone Brewing we had a house band, The Flocculators, that was made up entirely of members from Team Stone, and lots of other breweries do the same kind of thing. One of the best events for LA Beer Week was the Battle of the Brewery Bands put on by Eagle Rock Brewing, and for a few years, Noble Ale Works anniversary party had guest brewers come on stage and front a great house band for 2-3 songs. It’s great fun to combine these two passions-craft beer and music.

So with that background let’s talk about Blackberry Smoke:

I became aware of Blackberry Smoke about 10 years ago, and I bought a couple of their albums on iTunes. I probably had read a review of the band and thought I should check them out. Or maybe a friend told me about them, I really don’t remember. In any event, after I moved to Georgia, I started listening to a lot of music that came from this state – the music scene here is incredible and the list of great bands that got their start in Georgia is impressive. And I started listening to Blackberry Smoke a lot more, to the point that by 2020 and 2021 they were in very heavy rotation for me.

I think seeing them live is what sealed the deal for me. For several years, a couple of really good friends from my days at Stone Brewing and I would gather in Atlanta in December and drive up to Asheville for the Warren Haynes Christmas Jam. This started happening regularly when I moved to GA in 2016 after going to this concert a couple of times around 2013 and 2014 on Stone trips. It became an annual tradition, and was always a great weekend of great beer, great food and awesome music with a few of my favorite people. Anyway, Blackberry Smoke played one year that we went, and I remember saying to my 2 buddies, who weren’t familiar with the band, that I thought they might enjoy their music. After their set, we all looked at each other just saying “whoa”.  They were amazing, and after that is when I really started listening to them a lot.

In November 2021, our then VP of Sales (now our CSO), Jeff Chassner and I were at a taproom in Myrtle Beach for an event to support the New Realm launch there, and he pulled me aside to talk to me. Chaz knows I’m a big music fan, and he told me that we were in discussions about partnering with a local Atlanta band to make a new beer. He seemed really nervous about it, like I possibly wouldn’t like the band they were talking to and wouldn’t approve or something. So I asked who it was and when he told me it was Blackberry Smoke, I was like “Dude-this is one of my favorite bands. For real!!???” I was so excited, and I think he was a bit surprised by my enthusiasm. My wife Kathleen was with me on this trip, and I’m sure she got tired of me talking about how cool this could be. 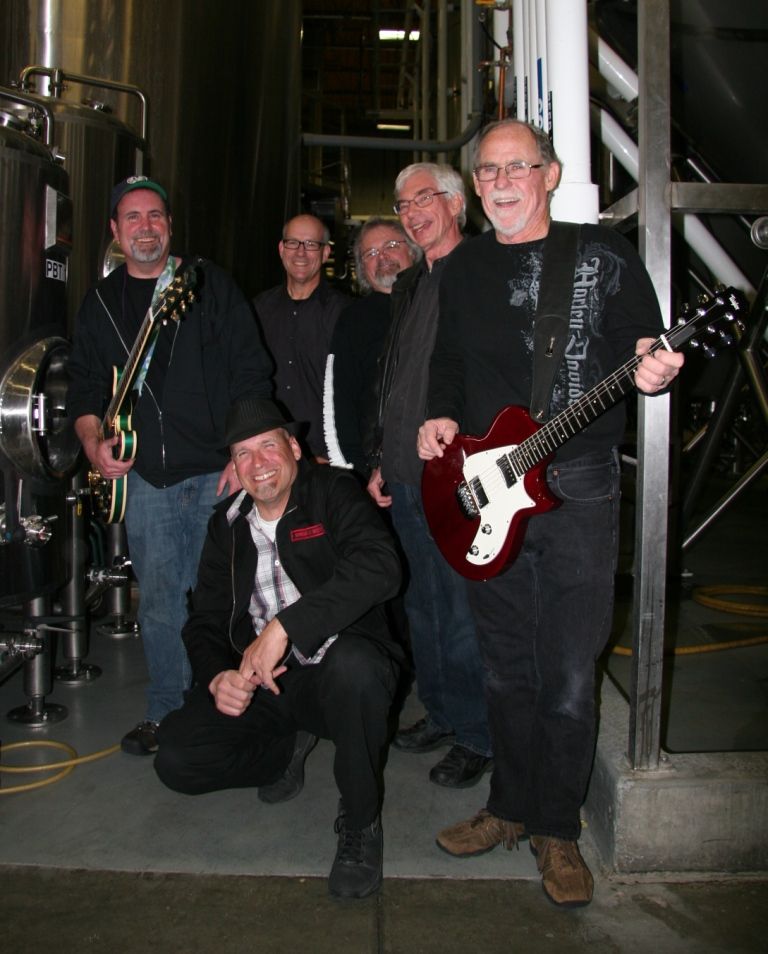 I hadn’t seen Blackberry Smoke since that Christmas Jam, although we did have tickets for a concert in Atlanta that was cancelled because  of Covid. As we started having meetings with drummer Brit Turner and George Tingley, who handles business development for the band, they got me a couple of tickets for their annual Homecoming show which happens the Friday after Thanksgiving in Atlanta. I ended up taking my 20 year old daughter with me and we had a wonderful time. I’ve been able to go to several shows since then, and have met several members of the band, who are as down to earth and friendly as anyone could be. And they are consummate performers-they put on a great show, have great songs, are extremely tight, their concert sound is amazing, and they know how to play to their audience. They mix their setlists up a bit every night, so there are some nice surprises in every show. Honestly, they put on as a good a show as any band I’ve ever seen.

When we started talking about the beer, Brit was very clear that he didn’t want anything with blackberries or smoke in it! He explained that their fan base would probably want a lager style beer, and since this beer was being considered a thank you for their loyal fans, that’s what we put together. Blackberry Smoke Lager is a crisp, tasty beer that has elements of both European and American golden lagers in its recipe. I’ve brewed a lot of lagers in my years, and I have to say this is one of my favorites. And it’s been heartwarming to see how the Blackberry Smoke Brothers and Sisters fan group have taken to the beer. I just wish we could find an easier way to get it to them-we currently are only licensed to distribute beer in 3 states, so we’re trying to figure out what we can do.

One of the coolest things about being involved with this project is all the philanthropic work the band does, much through Brit’s organization called the Lana Turner Foundation, an organization named after his daughter which raises money for families dealing with childhood cancer. In late 2009, Brit Turner was on tour in Europe when he was given devastating news. His daughter Lana had been diagnosed with Stage 4 neuroblastoma, a rare form of cancer that develops from nerve tissue. Only 3 at the time, tumors had taken over 97 percent of her body. After years of treatment, Lana’s cancer had gone into remission. It was at that point that Brit started up the Lana Turner Foundation and the commitment to ensuring the wellbeing of children was born.

At New Realm Brewing, we also do a lot for charities, and have our own organization called The Giving Realm.

I believe it was at a charity event that Chaz and George started talking about partnering up. With Blackberry Smoke, we have hosted several fundraising activities – pre-party shows with raffles, motorcycle rides with much more to come. As someone who has raised 2 children with lifelong medical conditions, this really hit home for me, and I am thrilled to do what I can to help contribute to such a great organization. We have a lot of exciting possibilities in the works. 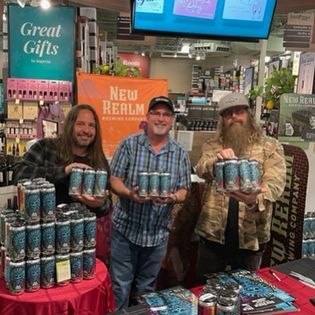 Over my years in the brewing business, I’ve been fortunate to have been able to work with some really great musical partnerships, events and musicians. At Stone Brewing we did a collaboration beer (Collective Distortion IPA) with Kyle Hollingsworth from The String Cheese Incident and Keri Kelli, who currently is a guitar player with Night Ranger and has played with Alice Cooper and some LA music greats. I’ve been able to play on stage with Keri, and also with fabulous LA based guitar player Mason Stoops. And I have a funny story about the Stone Enter Night Pilsner beer with Metallica and their drummer Lars Ulrich that I’ll share sometime later. For a long time I wanted to open a music-themed brewery, like my friends at Fretboard in Ohio have done so successfully. But I have to say that this collaboration with Blackberry Smoke has been absolutely amazing, not only for New Realm but for me personally. They are just great people with a great mission. And I do love their music-if you are a classic rock fan and haven’t listened to Blackberry Smoke, do yourself a favor and give them a try. Start with The Whippoorwill or their live albums Leave A Scar or Homecoming and you will understand where I’m coming from. I’m really looking forward to brewing up more cool things with them.